After a huge blueberry pancake and sausage breakfast and 4 cups of coffee, I hit the road around 09:30. I really enjoy a leisurely breakfast and another cup of coffee or two after breakfast- too bad I’m getting so relaxed now…with three riding days to go. I guess I had to work my way through the early wound up and excited/anxious days to get to where I am now. Today I rode through the hilliest section of Bike Route 17. It was all hills and nothing but hills. They ranged from 100′ to 1,000′ and many were quite steep. They were tough because you have to pedal hard when going downhill to maximize your momentum for the next uphill. Not much coasting or resting. And for many of the uphills I was in my lowest climbing gear, going about 5 mph. But it was a nice road with pretty scenery and low traffic so the ride was quite enjoyable overall. For most of the ride I was right next to the Delaware River and it is a very large and pretty river. I almost had a deer run into me again today. I was zipping down a hill and at the bottom spooked two white tail deer along the shoulder of the road.  One ran into the woods and the other one started to run towards the road- I yelled real loud and after one step the deer changed direction and ran into the woods. Deer and weather (and that one hawk…) have been my biggest hazards on this trip! I didn’t stop for lunch along the way and arrived in Barryville around 1:30 pm. I stopped for a pop and called the proprieter (Paul) of the B&B where I was staying. Janet said it was a few miles and a 1,200′ climb off the route but Paul would come get me if I called. Well, I left a message and then felt a little silly (and lazy) asking for a ride after everything I had been through so I just rode up the 2.5 mile, 1,200′ climb- it will be a nice, fast start for tomorrow! Daily mileage: 44, Trip miles: 3,638.

The Long Eddy Hotel & Saloon was a great place to stay last night: 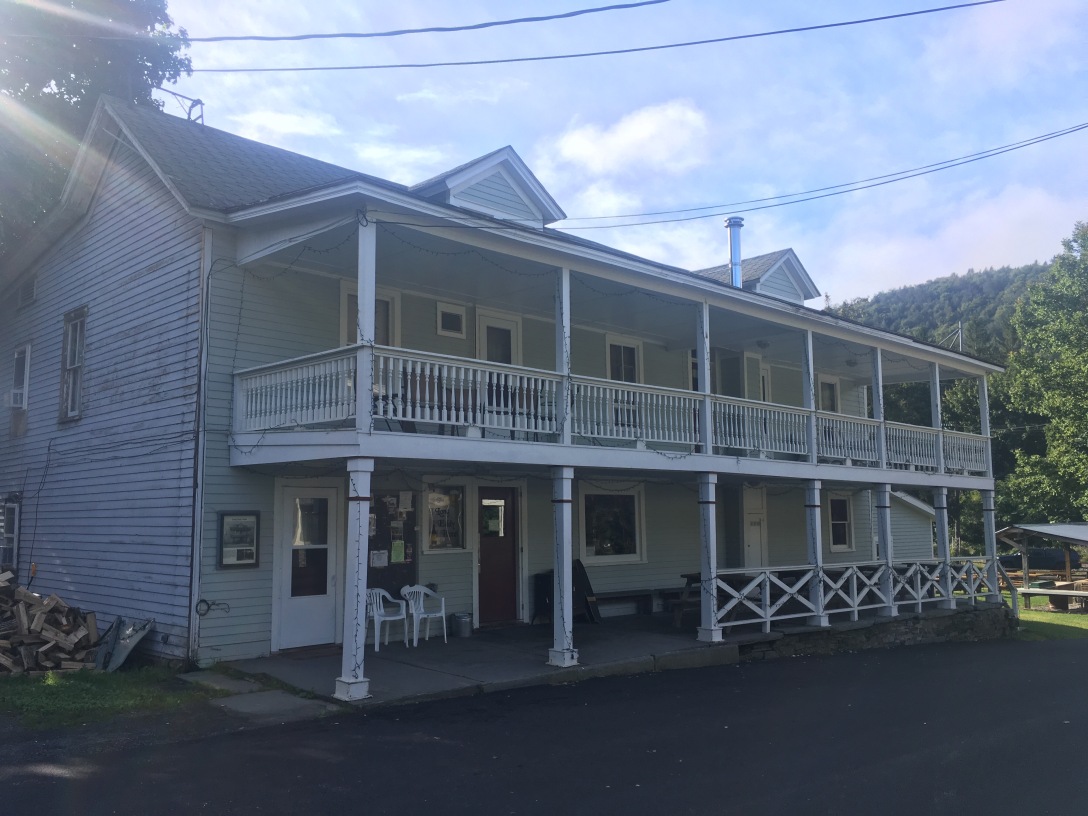 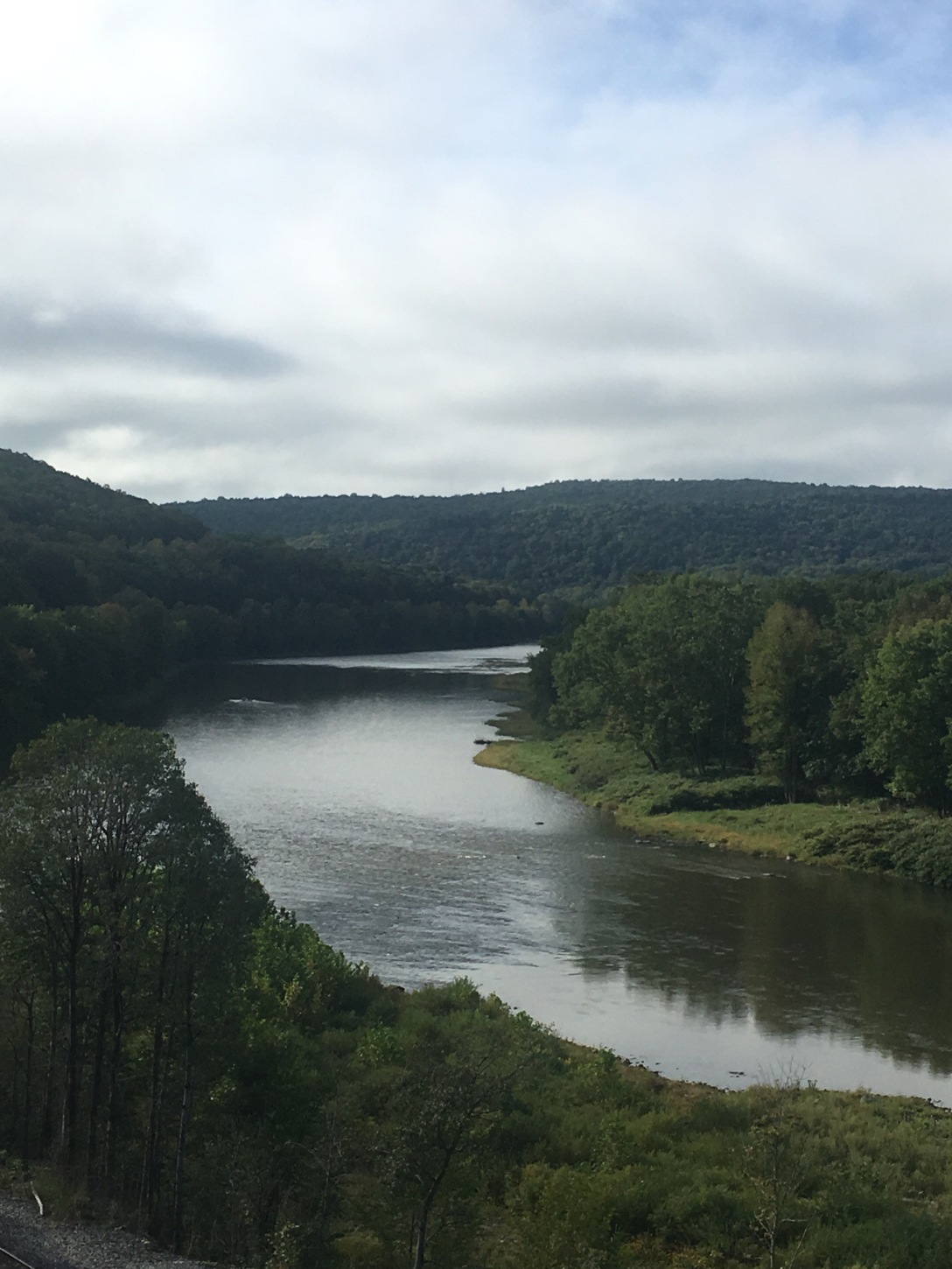 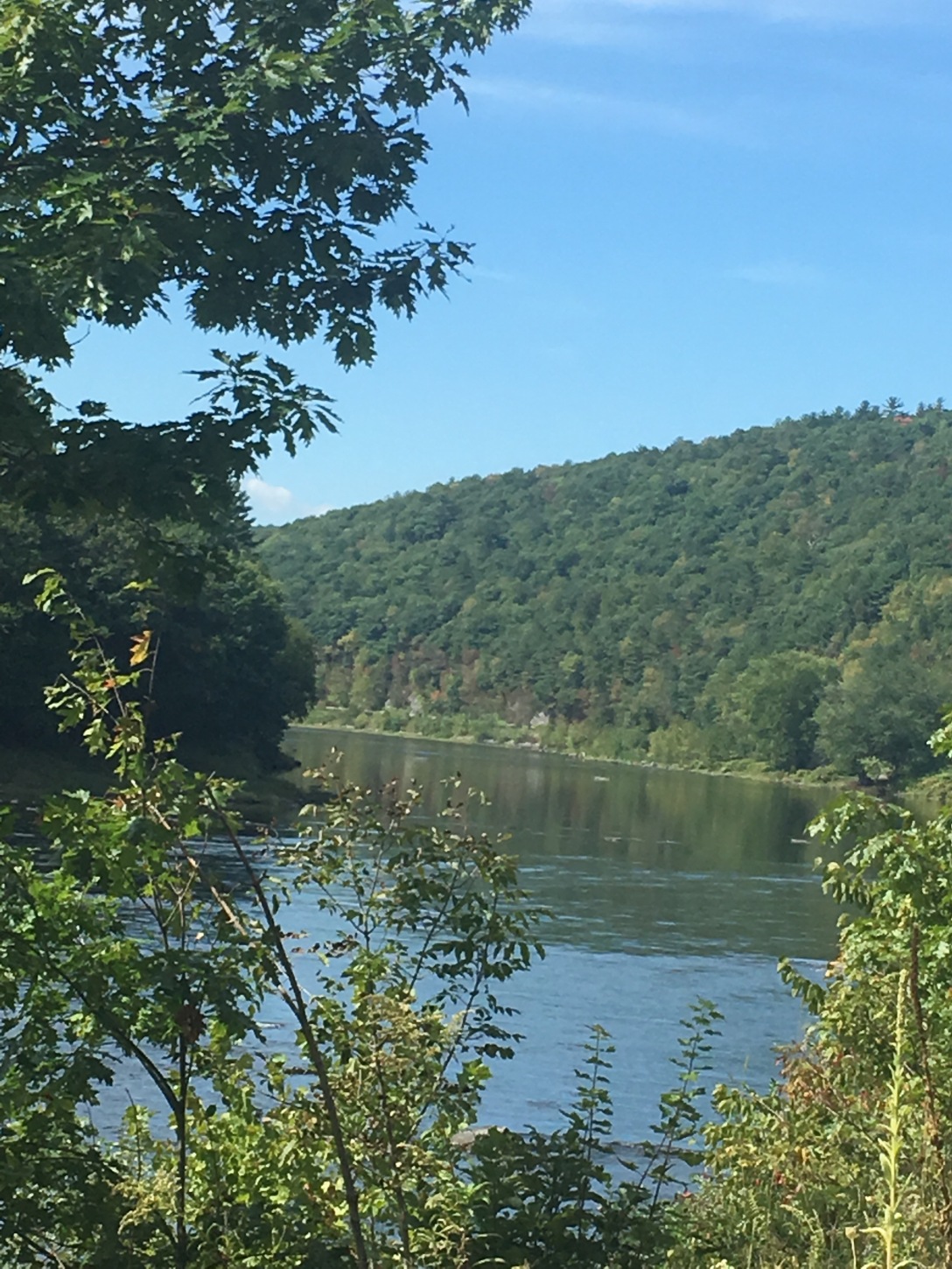 It seems that animosity between New York and New Jersey has been brewing for some time…: 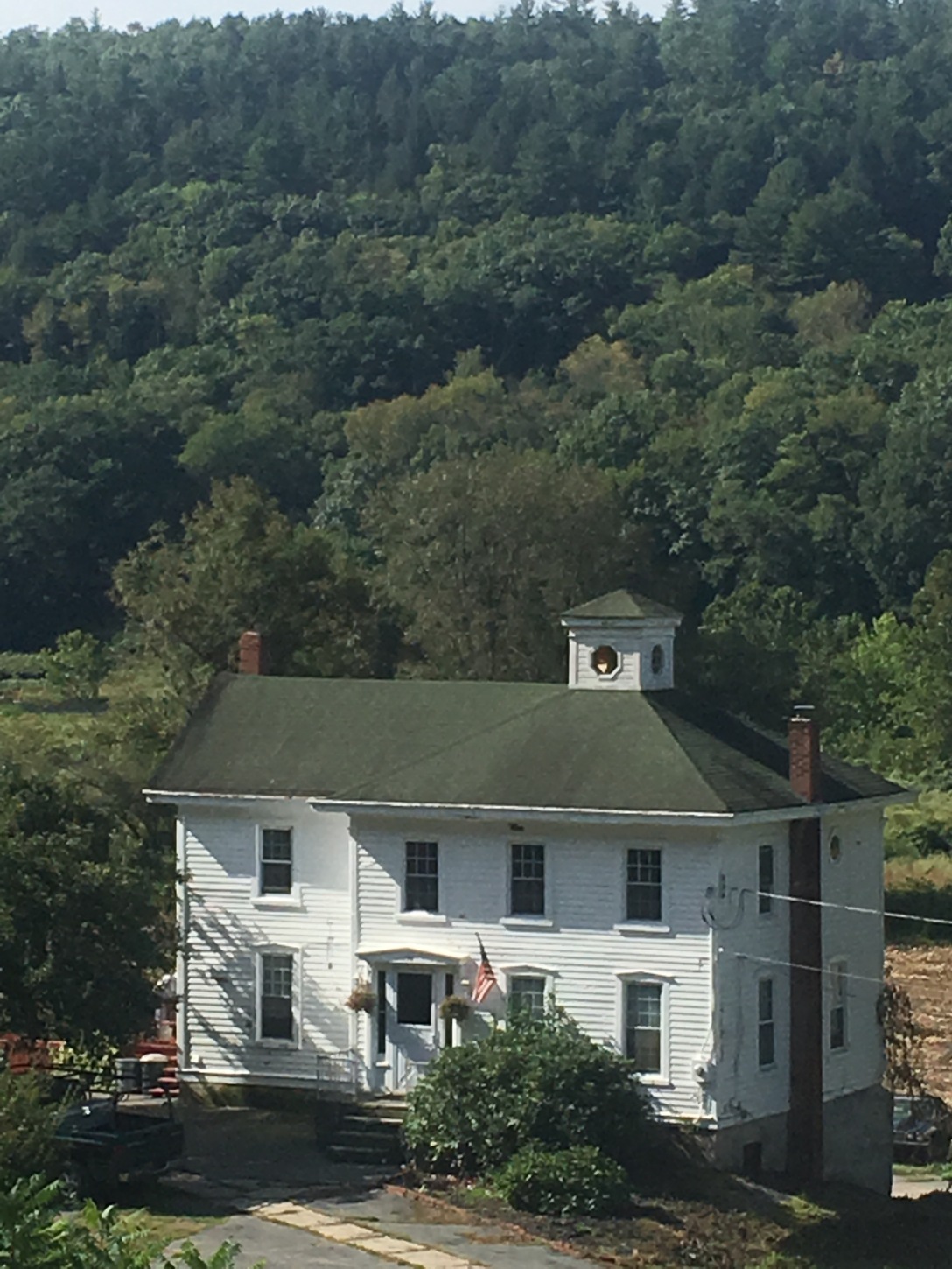 It was quite hilly today. You can get a sense for the magnitude of some of the hills from this view from the top of one of the hills. I hit 41 mph going down it (and probably 5 mph going up it): 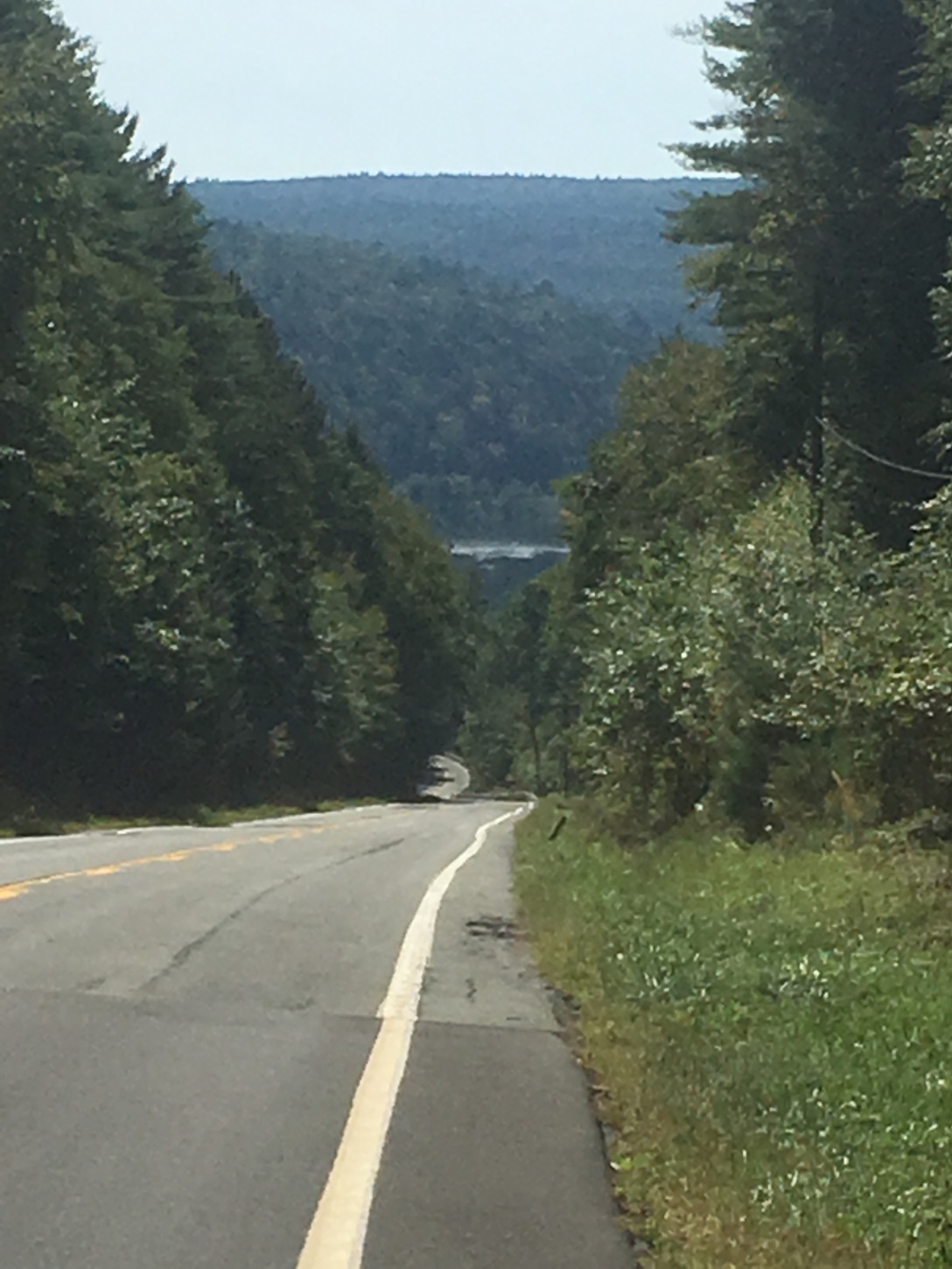 Riding along the Delaware River coming into Barryville: 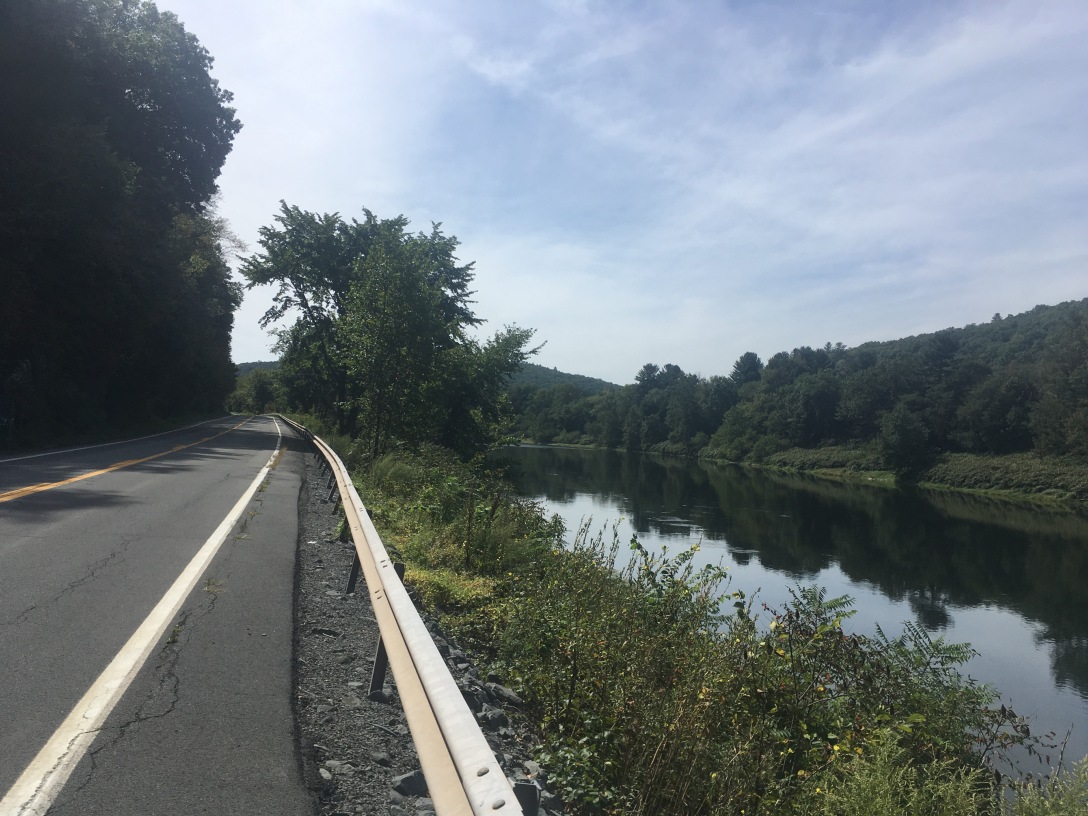 Here is the B&B where I am spending the night- Paul and his wife live right next door. I told Paul (the proprietor) that I was eating some of my freeze dried food tonight because I didn’t want to ride into town or lug it around any longer. He just brought me some fresh produce from the garden to accompany my dinner! 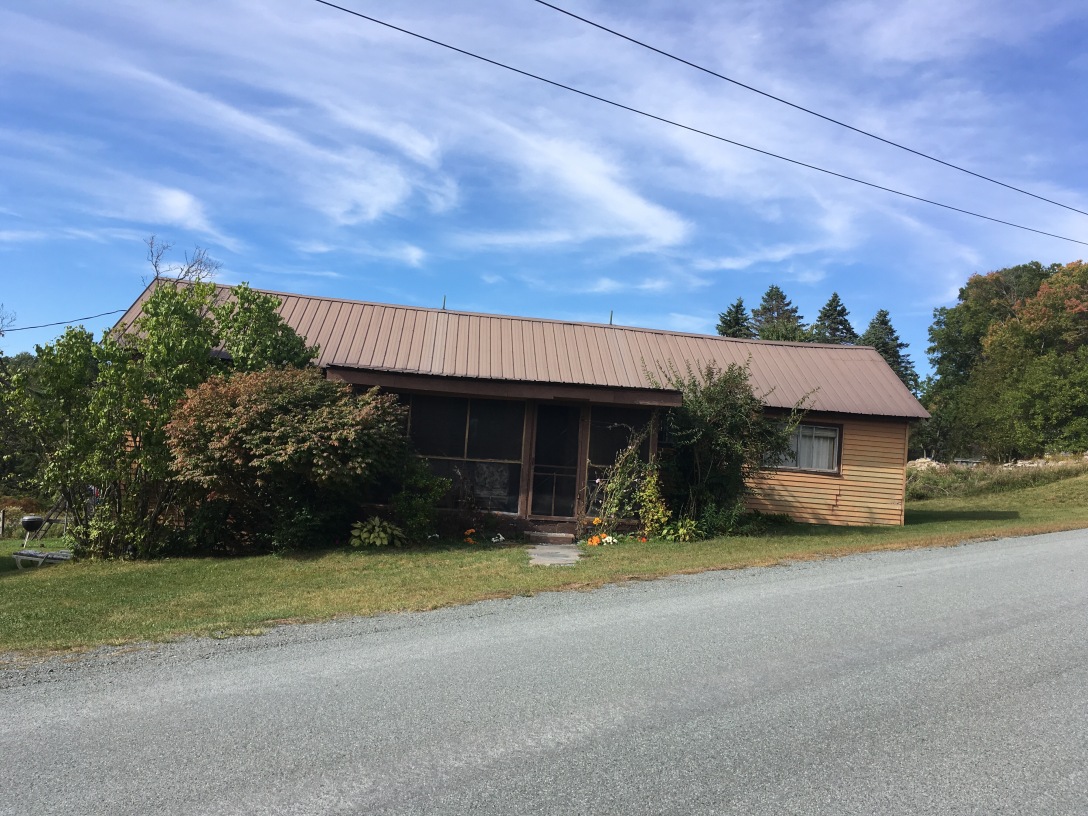 3 thoughts on “Day 67: A beautiful, hilly ride along the Delaware River to Barryville, NY”